As my Starcatchers residencey draws to a close, it seems like a good time to reflect on my time as Artist-in-Residence for East Renfrewshire. Throughout the year and a half I have had a number of memorable experiences. From being given the opportunity to create my own theatre show and installation to working with the children at the McCready Centre, it has been a time filled with an assortment of activities. There have been things to learn and things to show, things to do and things to see, things to make and things to hear. Above all it has been a wonderful opportunity to be given the time to spend developing my practice as an artist and creating my own work.

The children in the McCready Centre have taught me so much, and have greatly contributed to both my final pieces and I have very much enjoyed spending time in their world. I have also learned a huge amount from the staff, found new ways of working with children and encountered very open-minded approaches to learning and creativity. Throughout my time at McCready together with my collaborators I have performed various different versions of ‘Too Many Cooks’ as it evolved over time. We learned what worked well and what worked less well, and during this time the children contributed numerous ideas to the process. Similarly with ‘Sonic Playground’ I would regularly bring in switches, buttons, telephones playing audio samples, the Soundbeam and various other interactive audio devices for the children to discover and experiment with. These sessions were an invaluable part of the development and creation of both pieces of work.

During the creation of ‘Too Many Cooks’ I was fortunate enough to work with some extremely talented artists – Hazel Darwin-Edwards, Alasdair Satchel Ali Maclaurin and Rick Conte. These collaborations taught me a huge amount about the process of creating a piece of theatre for young children. Once the show was created it was time to take it out on tour, which brought its own share of adventures. At times it was an extremely tiring process, especially the early morning drives to each venue, followed by unloading the van, assembling the set, doing two to three performances in a day before dismantling the set, repacking the van and driving home only to repeat the whole process again the next day. All this carried out by at team of two – Hazel and myself – but so often the audience responses made it all worthwhile and it was a pleasure to perform alongside Hazel for an audience of laughing children and their parents. Likewise, the hours spent wiring up switches, lights and buttons for ‘Sonic Playground’ were well worth it to see the finished installation filled with happy smiling faces. The staff in the venues were incredibly helpful. It was especially enjoyable working at Carnegie Hall in Dunfermline, Lyra Theatre in Edinburgh and Platform in Glasgow (despite the van tyre blowing out en route).

To describe the process as a whole I would have to say it’s been an experience, an adventure, a learning process, a journey, stressful, enjoyable, difficult, and easy, a lot of work, and a lot of fun. There have been days spent chilling out playing relaxing music for babies and days spent carrying a heavy set up six flights of stairs because it didn’t fit in the lift. There have been meetings and discussions and there has been laughter and music.

In one of my final sessions at the McCready Centre I was delighted to spot a basket containing a collection of musical instruments. I was informed by members of staff that based on the music sessions I have been doing, they have put together their own collections of instruments. Shakers, drums, thumb pianos, buttons that make animal noises, ocean drums, chime bars etc etc. I hear they are still very much enjoying the sound quiz I put together and musical pots and pans can still be found throughout the centre.

It makes me very happy to see that even after I have left the centre they will be continuing to provide musical and audio experiences for the children using some of the methods I have introduced to them.

I am delighted to have been given this great opportunity and that I have had the pleasure of sharing it with so many skilled and creative people.

Many thanks to everyone involved! 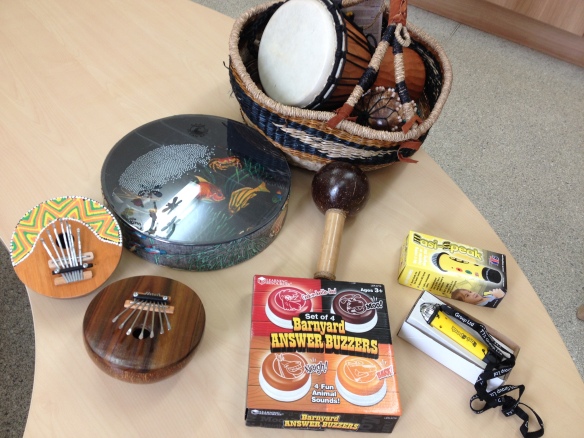 And the beat goes on… 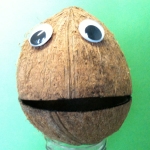 For today’s parent and child session I decided we should make our own pot and pan orchestra complete with chef’s hats and drum brushes. To begin with I got the parents to make simple chef’s hats from paper which the children then decorated. Once our hats were complete it was time to make drum brushes. We did this using drinking straws and electrical tape. These are great for playing pots and pans as they are loud enough to be musical and fun, without being too loud. Once all the children were equipped with hats and brushes it was time to break out the pots and pans and make some noise. Lots of noise but lots of fun!

For the parent and child session today I brought along a collection of instruments as well as some buttons and the Soundbeam. I set everything up in the room and let the children discover the instruments in their own time. I explained to the parents that they should feel free to play with any of the instruments they wished to and interact with their children. I then allowed the session to develop at its own pace, allowing the parents and children to lead the unfolding play. The children moved from one instrument to another, some going to play on their own, others playing together. Most would eventually choose a favourite sound or instrument. By the end of the session most parents were sitting relaxing and playing music with their child.

After the session I chatted with some of the parents, the feedback I received was extremely positive. The general opinion being that they very much enjoyed the more relaxed and less ‘structured’ session, not feeling the pressure of keeping their child interested or occupied.

In the afternoon it was time for the Staff CPD session. I once again used various circle exercises to introduce a way of creating music together. We had a lot of fun playing various rhythm games and passing sounds round the circle, before ending with a very relaxed improvisation based around chime bars and an ocean drum. Once again it was very satisfying to watch a group come together and discover that they are able to create music.

Today we brought ‘Too Many Cooks’ into the McCready Family centre for two very special performances. I was delighted to be able to put on the show for the children, the staff and a few parents. I was equally delighted that after over two months off it still fells very fresh.

I’m looking forward to coming back into the centre in a couple of weeks for some more music sessions with parents and children.

It was lovely being back at McCready today for a great fun music session with some of the mums.

For our session we all sat in a circle. I started by getting everyone to clap along to a simple 4/4 rhythm. We then took it in turns to clap one by one passing the rhythm around the circle until gradually a steady pulse developed. At this point I introduced the Boomwhackers (tuned plastic tubes). I placed the Boomwhackers in the centre of the circle and encouraged the group to choose one each. We then repeated the previous exercise passing the rhythm round the circle. This time with the introduction of the notes along with the rhythm a piece of music started to emerge. We then repeated the same exercise with chime bars, and once again a piece of music developed. At this point some of the group started swapping chime bars until the whole group was happy with the piece of music we had created.

I really enjoy working in this way, I feel that passing a sound round the circle is a great way to introduce a group to a form of looped or cyclic music. It’s also very satisfying when a group who started the session saying ‘I’ve got no sense of rhythm’ or ‘you’ll not get me playing music’ suddenly realize that they are doing just that.

Today was our final performance of ‘Too Many Cooks’ for the tour. It’s been quite an experience. There have been highs and lows. It has been very hard work, but on the whole it has been a great experience and I am delighted to have had the opportunity to do it. There has been lots of very positive feedback from parents and teachers,  we had a lot of fun doing the show, and we’ve had the pleasure of watching lots of happy smiling children watching us.

But now I’m tired, and I need my bed!

Three great shows today with ‘Too Many Cooks’ Brilliant audiences, lovely feedback, we even managed to fit the whole set in the van again afterwards.

Today was our final ‘dress rehearsal’ of ‘Too Many Cooks’ with a few invited guests. I’m really happy with the work we have done since our last run through. It feels like we have a really good show now. After a good run and some very positive feedback, I’m pleased to say that we are ready to open tomorrow at Greenbank Gardens. Now to pack it all up.